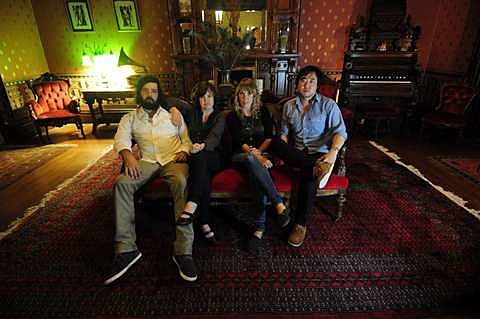 We mentioned earlier today that The Fresh and Onlys will be in NYC in November, supporting their great new album, Long Slow Dance. But if you would like to hear the warm baritone of Tim Cohen live sooner, his other band, Magic Trick, will be here opening for fellow San Franciscans Sonny & the Sunsets at Maxwell's on August 15 (tickets), Mercury Lounge on August 16 (tickets) and Glasslands on August 18 (tickets).

What began as a solo project for Cohen soon became Tim Cohen's Magic Trick and has now morphed into its own entity. While still featuring Tim's songs and melancholic/psychedelic worldview, Magic Trick are more are more pop-oriented than F&O (think Lee Hazlewood) with keyboards, glockenspiel and the lovely harmonies of Noelle Cahill and Alicia Vanden Heuvel. You can download two tracks from their new album, Ruler of the Night, above or stream the whole thing at Spotify.

Meanwhile, I'd be remiss not to talk about F&O guitarist Wymond Miles' new solo album, Under the Pale Moon, which it out now on Sacred Bones. The man whose post-punk, heavily-effected playing style give Fresh & Onlys such distinctive flair goes for dark romance on his own material, posited somewhere near Bowie's Berlin period or Heaven Up Here-era Bunnymen. (I wouldn't be surprised to learn he's a Crime & the City Solution fan, either.) It's a debonair debut and you can download an MP3 from it above or stream it in full at Spotify.

All Sonny & the Sunsets / Magic Trick dates are listed below, along with a Magic Trick video.