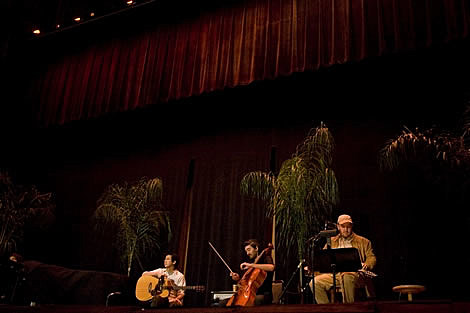 "We did soft rock on I, hard rock on Distortion, and folk à la Judy Collins on Realism," [Stephin Merritt] says. "They were conceived as a trio, but particularly with Distortion and Realism, I thought of them as a pair." The titles he had in mind at first were "True" and "False," which got set aside when he couldn't figure which label applied to which album. Of course, that creative cul de sac is itself vintage Merritt.

"I asked myself, 'Would it be too simple to say that Distortion is false, and that Realism is true? Or would it be too annoying to say the reverse?' So I scratched that," he says, pausing at length. "And now it is what it is." [National Post]

The Magnetic Fields will be touring in support of their new record, Realism, which is out today (1/26). Toward the beginning of the trip, on Saturday, February 13th, they'll be playing at BAM's Howard Gilman Opera House, a show that's sold out or close to it (BAM directs you to their box office phone, 718.636.4100, for inquiries).

The tour returns to NYC in March, and they've expanded their run at NYC's Town Hall to three nights. The added show will be on Friday, March 12th. Tickets for the first show are still on sale (but not the second). The third goes on AmEx presale Wednesday, January 27th at 11am. General sale starts Friday, January 29th at noon.

All tour dates (including Magnetic Fields' European leg), a new Realism video, and clips of Dewanatron (half of which opened for Music Tapes last March) are below...

The Magnetic Fields - We Are Having A Hootenanny - Realism