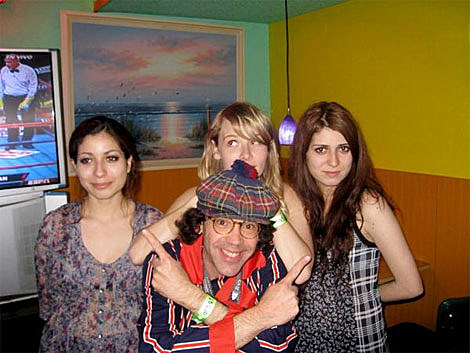 Technically we weren't suppose to tour till January but we figured since an opportunity came up with Sloan we couldn't say no. We've toured with the guys before and it was a blast, so here we go for a second round in 2009!

Now along with the good news we have a not so happy announcement to make for Magneta fans and for us :-(

Sadly, French won't be able to make it on this tour. Because of the late notice and spontaneous nature of the tour French must stay back and finish her exams cause she cant put back anymore school at this point and/or flunk out cause that would be a waste of a brain. She is actually a very smart cat and has always balanced music and university at the same time. And over the years has always put Magneta first and we support her now so she can be back on the road with us sooner rather then later, Its her last year folks!

She'll be joining us again right after the holidays. French we luv ya!

We'll be taking our good friend Kat from a favorite Toronto Indie band Lipstick Machine and making the trek together to some American cities and some Canadian... check out the tour section!

I didn't even realize that Magneta Lane released a new album called Gambling With God on Last Gang Records in September. That's probably because it was only released in Canada.

As Lexi pointed out above, Magneta Lane will join Sloan on their previously announced tour that includes stops at Maxwell's and The Bell House. All dates and a video below...