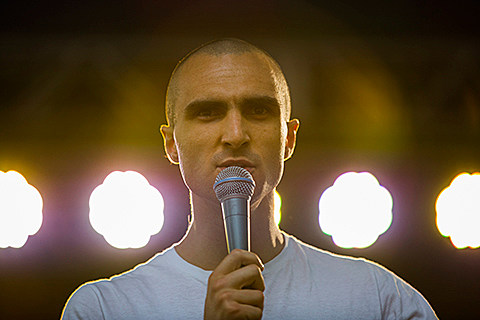 Additionally, the Scott Walker / Sunn O))) album that comes out ten days after Basilica will be played in full every hour from 2-9 PM on Saturday at Future Past Studio, which is located near Basilica.

For Majical Cloudz, this festival happens right before their tour with Lorde hits NYC for three dates.

Tickets for the festival are still available. More details below...

Today we're excited to announce several additions to the BasilicaSoundScape program. On Friday night, September 12, Leg UP! will present a showcase. Seminal British folk guitarist Michael Chapman will perform and video statements from artist and musician Torn Hawk (Luke Wyatt) will be shown in the north hall.

Additionally, acclaimed visual artist Sterling Ruby will create large-scale quilt-like flags as backdrops for the main stage. Ruby's flags are sewn together from black and blue bleached denim and dyed canvas in shades of acid orange, yellows, purples and reds.

Every hour from 2-9 p.m. on Saturday at Future Past Studio, a former church that's located near Basilica, you can preview the upcoming collaborative album between Scott Walker and Sunn O))), Soused. The album will be played in full each hour.

The official BasilicaSoundScape After Parties will take place at the Half Moon Bar on Friday and Saturday nights. They will feature DJ sets from Blazer SS, Soft Pink Truth (aka Matmos' Drew Daniel), and T. Cole Rachel and Josh Sanchez of NYC's only gay metal DJ night, Rainbow in the Dark.