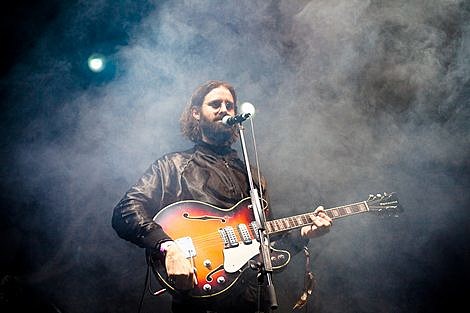 Downtown Records was founded in 2006 and they'll celebrate their fifth anniversary at Terminal 5 on March 5th by roping in some big names on their labels/imprints. Miike Snow will headline the show and will bring along Major Lazer with Santigold (who now has her own pair of Vans) and Ed Banger DJs Mehdi & So Me. Tickets are currently on AMEX presale and go on regular sale at noon tomorrow (1/28). The show marks four appearances in a row at Terminal 5 for Miike Snow, though the last was a DJ set.

The NYC date is one of two US dates scheduled for Major Lazer. They'll also take on Miami on March 12th as part of the 9 Mile Music Festival along with almost the entire Marley clan (Stephen Marley, Damian Marley, Julian Marley, Kymani Marley) along with Inner Circle and many others. More details, including ticketing, can be found at the 9 Mile Music site.

Major Lazer and related tour dates and some videos below...