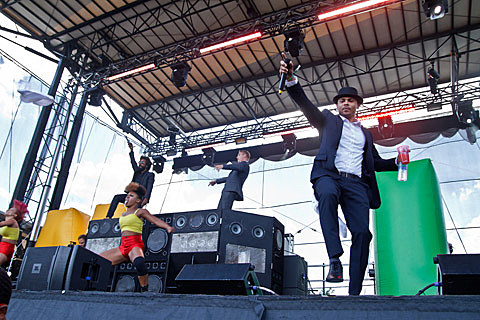 Diplo's Major Lazer project (which Switch is no longer a part of), who is set to play the Mad Decent Block Parties this summer, have just announced their own NYC show, which goes down on October 27 at Terminal 5. Tickets for that show go on sale Friday (8/3) at noon. A full Major Lazer tour has not been announced yet but a few other North American October dates exist, all of which are listed below.

Meanwhile, we recently mentioned that more details for the summer's free Mad Decent Block Parties have been revealed, and that the NYC party will go down on August 5 at Williamsburg Park with Major Lazer, Erol Alkan, Bonde Do Role, Lunice, Riff Raff, Mr Muthafuckin' eXquire, Reptar, Zebra Katz, Bosco Delrey, Baauer, Kito, and Paul Devro. The party is free and all ages but RSVP is required.

Mad Decent has also just announced that they'll throw a Puma-presented official (21+) after party at Music Hall of Williamsburg that night (8/5). The only performers listed as of this post are Erol Alkan (who plays the party in Williamsburg Park) and "guests." Tickets for the party are on sale now.

A list of all currently known Major Lazer dates below...