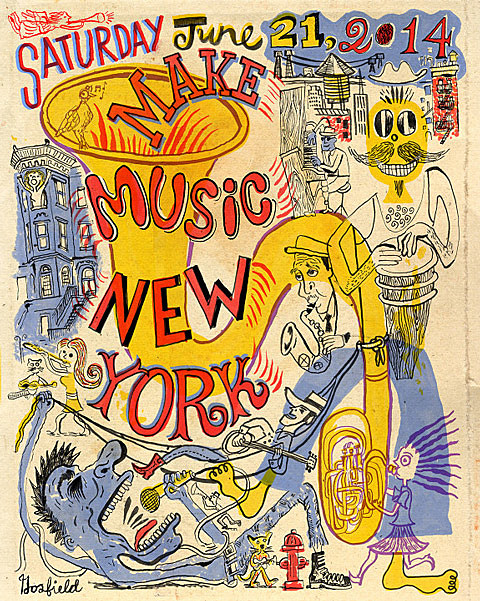 Make Music New York is back, bringing some 1300 free live music performances (sometimes participatory) to public spaces all over the Five Boroughs. Unlike previous years, the 2014 edition year is happening on a Saturday -- this Saturday (6/21) to be specific. There will be bands and musicians playing on the street all over -- which with the World Cup should make for a very boisterous first day of summer -- but in addition to that there are a number of special of events. Some highlights:

"Mass Appeal": There will be 18 different performances across the city all involving a single instrument -- Accordions, French Horns, Gongs, Recorders, two different ukulele concerts, and choral among them -- and if you can play, you can play. Download the sheet music, show up and join the band.

"Red Baraat's 100+ BPM": On a similar note, bhangra band Red Barat will debut a piece commissioned by NPR especially for MMNY. Mobile bands will parade through Brooklyn and converge on Grand Army Plaza at 4:30 PM, where they will join Red Baraat on the steps of the Brooklyn Public Library. Brass and percussion players are invited to get involved.

"The Sound of Downtown": River to River Festival brings this interactive experience involving mobile apps that allows folks to "shape and explore the sonic landscape of Lower Manhattan in a brand new way!"

"Porch Stomp": For fans of old time folk and bluegrass, over 30 acts will be playing on Governors Island.

"Privia Piano Bar": Billy Joel playing MSG once a month isn't enough for you? This mobile piano bar will be bringing his hits on a grand piano loaded onto the back of a truck, making stops all over Manhattan for one-hour concerts. And yes they will be playing "52nd Street" on 52nd St.

"Rhythm on Rikers": This concert is the culmination of a 10-week program to teach hand drumming to a group of inmates at Rikers Island. (Among the teachers of this initiative is Kid Millions of Oneida.) This show is just for prisoners and guards.

There's lots more than this. Check out the full Make Music NY schedule.