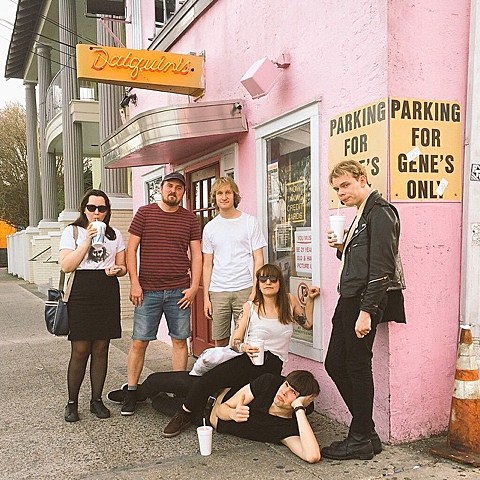 Makthaverskan really don't sound like many other groups at the moment. They very much remember that post-punk did indeed stem from punk, but not by cranking up the distortion. The guitars are all relatively clean, and the leads soar like Joy Division or Cure leads, but there's a backbone to the rhythm section. On a song like "Distance," all those guitars would need to do is switch to power chords and they'd have themselves a Black Flag song. But what really sets Makthaverskan apart from the rest is Maja Milner's powerhouse voice and her lyrics.

Swedish post-punks Makthaverskan had some visa issues delay their trip to the US and cancel both of their NYC shows, but as the above pic the band Instagrammed from New Orleans proves, they finally made it over. To make up for those missed NYC shows, Makthaverskan will now play Saint Vitus on April 6. No other bands announced at the moment, but tickets are on sale now.

Meanwhile, the band will hit Austin for SXSW this week, and one of their shows is the free BrooklynVegan Friday day party at Red 7 with Swervedriver, Superchunk's Mac McCaughan, Pianos Become the Teeth, Pity Sex, United Nations, Power Trip and more.

Makthaverskan's latest album is II, which Run for Cover gave a US release in 2014 (the quote above is from our writeup on it). Stream that, with their more recent single "Witness" and their updated list of dates (full SXSW schedule included), below...