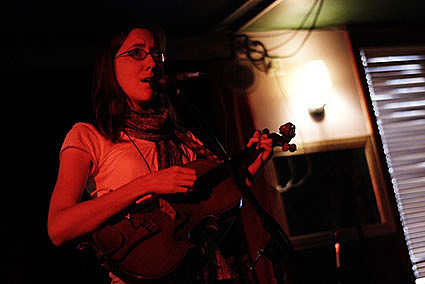 She plucks that viola in precise patterns–repeated notes, a syncopated chord, a countermelody–as the only accompaniment for her gentle, transparent voice, which has an undercurrent of Celtic melancholy. The songs are sparse, meditative and utterly involving. In “Talk To Me,” as she plucked two alternating notes an octave apart like a slowly ticking clock, she sang, “I wish you could talk to me/You turn away, and it breaks my heart.” There’s a sense of timelessness in that song–and no setup time necessary. [Jon Pareles, NY Times]

Marla Hansen's resume keeps getting cooler and cooler. In addition to all the Jay-Z/The National/Kanye West/Sufjan Stevens stuff we already knew about, I just realized that she helped perform Jonny Greenwood's "Popcorn Superhet Receiver" as part of the Wordless Music Orchestra the other day, AND she'll be playing as a member of Jens Lekman's band on his upcoming European and U.S. tours. Tonight (Jan 21, 2008) she plays solo at Union Hall. Lauren Smith is also on the bill.