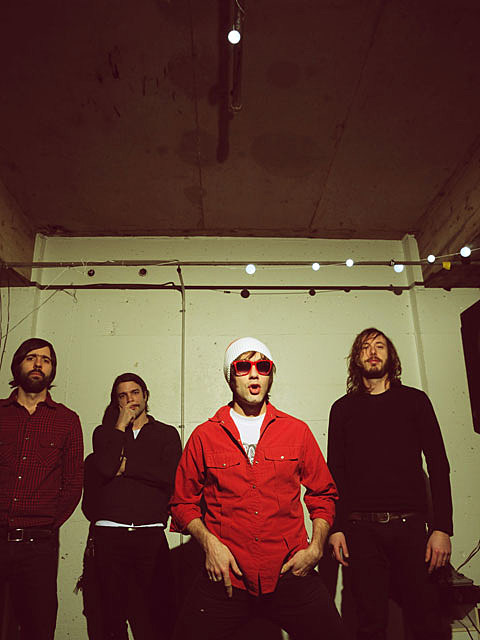 Let's start by quoting what Bill wrote in May:

Like a lot of folks, Malajube made a big impression on me in 2006 with their record Trompe-L'Oeil and, even more, their string of fantastic CMJ performances that year. The tunes were catchy, they were great live, the language barrier didn't matter so much. I must admit 2009's Labarinthes didn't make much of an impression but I've really been enjoying the band's brand new album La Cavern. The album is out now in Canada and will be available in the U.S. sometime soon on MB3 Records.

The new album walks the line between guitar pop and space rock and I keep imagining them performing songs like the vaguely disco "Le Blizzard" on the Muppet Show. There's a general soft filter '70s vibe to the whole of La Cavern that feels very comforting.

We now know that La Caverne is out physically in the US on September 27th, AND Malajube are back in NYC for two shows. They play tonight (September 16) at Mercury Lounge with Brian Bonz, and Saturday (September 17) at The Rock Shop in Brooklyn with Les Sans Culottes and Jonny Chan & The New Dynasty 6.

The two shows are the start of a US invasion that is spread out between now and October 8th when they play Wadsworth Atheneum Museum of Art in Hartford, CT as part of a run of dates with fellow Canadians The Besnard Lakes. All tour dates below...