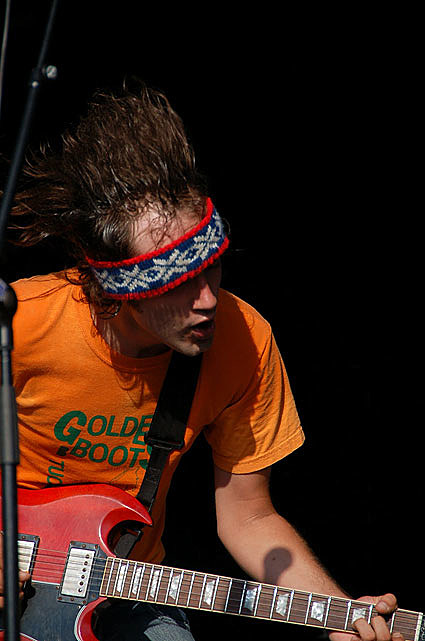 English Canada isn't exactly a model of tolerance when it comes to franco-pop, but here the intricate pop of [2006's] Trompe L'Oeil was taken to heart by a nation's worth of critics and indie-rock fans, scoring Malajube a nomination on the first-ever shortlist for the Polaris Music Prize later that year. Suddenly, Malajube found itself appointed ambassador for the "other" half of the Montreal underground, the half that conducts its rock `n' roll business in French and, as a result, rarely gets much mention in Anglo coverage of the city's recent, globally documented musical blossoming.

Frontman Julien Mineau concedes it was "really flattering" when U.S. organs like Pitchfork and Spin started singing Malajube's praises, and says he's still somewhat boggled that the band's latest album, Labyrinthes - out [February 2009] on Montreal indie label Dare to Care - is about to receive an official American release.

"It's strange. We're lucky to be listened to even though we're in an English-music world," [Mineau] says from his home in Ste-Ursule, a rural community on the north shore of the St. Lawrence. "But it's cool like that. I'm really happy that we get this kind of attention..." [Toronto Star]

Labyrinthes came out in the US on Dare to Care in March. In support of that, Malajube has been playing regular dates in their native Canada -- they'll be visiting the US for shows in July. Those include a gig at Maxwell's on Wednesday, July 22nd and a show at new Brooklyn venue Littlefield on Friday, July 24th. Tickets for the Maxwell's show are on sale.

The band put out a video for the song "Porté disparu," off the new record. That's posted below with a making-of and a live rendition of the tune, and all tour dates...