Male Bonding at Bowery Ballroom in 2010 (more by Chris Gersbeck) 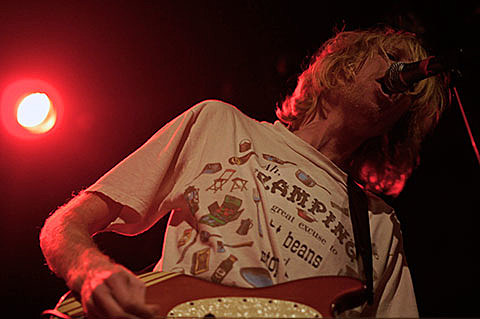 UK lo-fi rockers Male Bonding are releasing their followup to last year's debut, Nothing Hurts, this summer. The new LP, Endless Now, comes out on August 30 via Sub Pop. The band brought in producer John Agnello (Sonic Youth, Dinosaur Jr.) to help beef up their sound on the new album. Frankie Rose provided harmony vocals on the album, and the band also worked piano, cello, and mellotron into their songs. Frontman John Arthur Webb recently spoke to Pitchfork about the album's bigger sound:

It would suck to just fucking knock out lo-fi albums once a year. We're happy to be shaking that off. It's an easy way to hide-- a bunch of reverb and compression disguises a lot of things. It worked great for us on the first record but you have to try and explore the avenues that are open to you; we never could've paid to go into a studio before Sub Pop was involved.

That said, it wasn't really that long ago that we recorded the first record, so we haven't changed that much. It's not going to sound like Odd Future or anything.

Check out the sound they're going for on the pop punk-charged track "Bones," which you can grab an MP3 of above. They haven't exactly abandoned lo-fi, though it is certainly less noisy than their debut. You can also watch an album trailer below.

Male Bonding go on a short North American tour in support of the album with the no-frills indie pop trio Love Inks. The tour hits NYC on August 27 at Glasslands and August 29 at Mercury Lounge. Tickets are on sale now for the Glasslands show and the Mercury show. After the North American tour, both bands will head out on their own European tours.

All tour dates and tracklist below...

--
Endless Now Tracklist:
1 Tame the Sun
2 Carrying
3 Seems to Notice
4 Bones
5 Before It's Gone
6 What's That Scene
7 Mysteries Complete
8 Can't Dream
9 The Saddle
10 Channeling Your Fears
11 Dig You Out