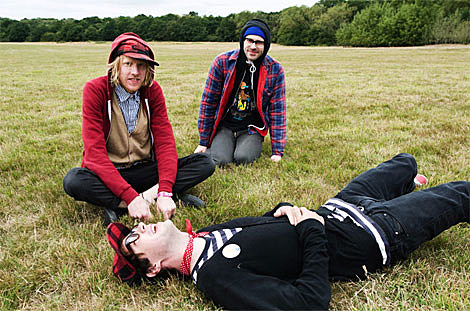 New Sub Pop signees Male Bonding are in from London for a string of New York shows, starting tonight (10/17) where they'll play with No Age, Soft Circle and Hot Box at a Todd P-related venue that, for now, is being called Above the Auto Parts Store. (Details on that at the bottom of this post.) Who are Male Bonding? Here's what Sub Pop says:

Made up of Robin Silas Christian (drums), John Arthur Webb (guitar & vocals) and Kevin Hendrick (bass and vocals), and rising from a flourishing DIY scene in their adopted hometown of Dalston, London, Male Bonding became a very real thing in May, 2008, with their first show, at an insane house party called "RAGE!" Male Bonding was born raging and it's been non-stop ever since. That party evolved in to a split 7" release with PENS on Male Bonding's own label Paradise Vendors Inc. (which sold out in a week). To date, Male Bonding has dispatched seven releases including a Flipper tribute 7" (on Domino Records) alongside PPM Allstars, Lovvers and Ponytail. The band has toured the UK with Brooklyn's Vivian Girls and played shows with Lovvers, HEALTH, Fucked Up, Graffiti Island, Mika Miko, These are Powers, NISENNENMONDAI, Magik Markers, and Finally Punk among others. We are excited by, about and for Male Bonding. You should be too.

Apart from tonight's show, the rest of Male Bonding's shows will fall during CMJ, playing six shows, finishing with the official Sub Pop/Hardly Art showcase on Friday (10/24) that also features Obits, Pissed Jeans, Golden Triangle, Duchess & the Duke, Moondoggies, Dum Dum Girls and Unnatural Helpers. All Male Bonding dates are at the bottom of this post.

As for that Above the Auto Parts Store venue, here's what Todd P's website says:

ABOVE THE AUTO PARTS STORE is a rad Brooklyn raw loft space, it's heated & has a stage & we're renting a monster sound system for the night! Entrance is via an awesome ramp all the way to the 2nd floor, & the bands play in front of a wall of windows looking out onto the streets of Brooklyn!

All dates for Male Bonding, plus video, below.