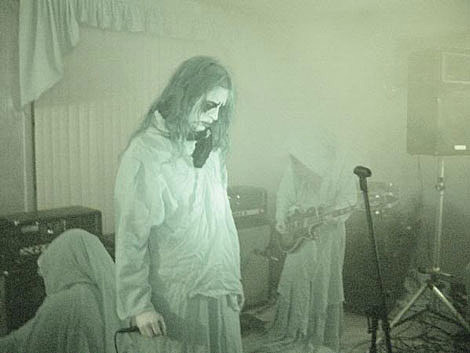 Influential US Black Metal great Xasthur is calling it quits. Malefic has officially declared that his new album, Portal of Sorrow will be his last metal album and that the "honorable thing to do is to end the band". He cites more than one reason including not wanting to "turn into one of those bands who rely on too many guests and session musicians to make people interested in their music again". At the end of the letter he posted on his blog, he thanks Marissa Nadler (a guest who is definitely making lots of people interested in the new album) "for taking her voice to another level" on the new record. Read the full letter below...

This album, "Portal of Sorrow", is the last Xasthur album, period.
The honorable thing to do is to end the band and not hang around too long, like so many metal/black metal bands do. Enough is enough, right?

I'm not able to make it work anymore. I don't want to turn into one of those bands who rely on too many guests and session musicians to make people interested in their music again. Some help is fine but more than some help is very cheap and it becomes others, not the roots of the band that makes the difference and the music work. I don't want to fall into that pattern.
The motivation and inspiration used to be there full time and now it's not there at all, not for doing Xasthur at least. It is a roll or persona that I have simply outgrown. I've been saying I'm sick and tired of it all for too long... and now, I'm going to back it up. There are or have been literally 18,000 black metal bands; it does not matter if there's one less.

Just like in the nineties, I made a few recent attempts to put a real line-up together and it still failed; another sign that said "give it up already".

However, I wanted to end on a better note with this 'Portal of Sorrow' album because the album that came before it, 'All reflections drained', was not up to par and I couldn't finish up with an album that I was less than satisfied with. Now, I suppose any or all goals have been reached and there is nothing more I wish to try with Xasthur and it's time to move on...

Since it would be foolish to give up music all together, I have something else to fall back on that is beginning to take shape. It's a new beginning that I'm quite excited about.

Instead, I'm going to do something different by not performing any kind of metal at all!
There's no use in trying to reinvent black metal or turn it upside down, it's all been done and in the end, it's still metal and will remain within those circles, stereotypes and boundaries no matter what. Overall, I need a bigger change in my life and with music than just trying to change metal.
There isn't anything to lose.

I would ask you to stay tuned for my next project and give it a plug but there's no need to. It's probably of no interest to you and again, it has nothing to do with metal and I'm not trying to keep any connection or ties to it.
I will not name influences, genres or anything of the sort.

Believe me when I say this decision has been well thought out for months and doesn't come out of frustration.
Something I usually hate is comebacks, reunions or reformations of bands. You can be rest assured (for even relieved) that this will not happen.

I would like to say fuck you to so many people it's not even funny, but that would be just another way of not washing my hands and hanging around, so I won't bother.
Instead, I would like to say thank you to a handful of people who took an interest in the music over the years and had the patience to (slowly but surely) watch it grow and develop. I'm more grateful than you think; you know who you are and I know who you are.
I'd also like to say thanks to Marissa Nadler for taking her voice to another level, to Ron for helping design the album and to Hydra Head for the hospitality over the last few years.

Disharmonic Variations (label):
It will most likely continue, even though Xasthur will not. I'll get into talking about this later.

The full statement is at the Xasthur blog (via). Xasthur's new LP, Portal of Sorrow is out NOW via Disharmonic Vibrations, with the vinyl on the way via Hydra Head (who recently re-released his demo).