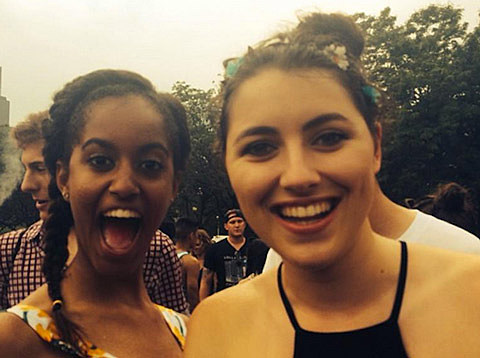 The Obama's tall 15-year-old was with three friends and was happily chatting away as she left the muddy venue. Despite blending quietly into an oblivious crowd, she was flanked by two huge guards, apparently Secret Service agents in plains clothes, who made sure she and her friends - two girls and a boy - had plenty of space to make their exit.

The crowd on Columbus was light as she walked well after the bulk of the crowd has gone at about 10:15 p.m.. Malia was wearing a yellow v-neck romper, but more importantly, she and her guards had managed to stage clean in Lolla's messy, muddy fields. - [Chicago Sun-Times]

We didn't spot Malia Obama at Lollapalooza on Sunday, but we we got lots of pictures of Day One, Day Two and Day Three of the Chicago fest.

Chance the Rapper was one of the artists she was seen checking out. We have pictures from his set on day three, but not pics of R Kelly who Chance brought out on stage for three songs.

In related news, the controversial R Kelly was recently booted off an Ohio festival lineup after many protested.