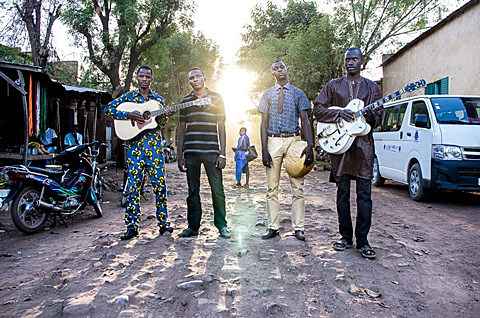 Songhoy Blues fled their home of Northern Mali when armed Jihadists took control and banned music altogether. In Southern Mali city of Bamako, they caught the attention of Damon Albarn who was there in 2013 with his traveling "Africa Express" project that brought Western musicians (like Nick Zinner and members of Django Django and Metronomy) to Mali to collaborate with local musicians. Zinner ended up producing and playing on Songhoy Blues' debut album, Music in Exile, and he brings a nice grit to their sound. It's a terrific record -- which gets its physical US release on April 21 -- and you can stream it below. Songhoy Blues just released a live performance video for "Soubour" which features Zinner, and you can also see them in new documentary They Will Have to Kill Us First: Malian Music in Exile. Check out the documentary trailer and live video below.

Live, Songhoy Blues need no help conveying their joyous, funky sound. (I caught them at the afterparty for the recent David Byrne tribute and they were great.) You may have seen them when they opened for Alabama Shakes back in March, and they played SXSW and a few other NYC shows as well. They'll be back for a few more US shows, including two in NYC.

The NYC shows happen June 15 at Rough Trade and June 16 at Mercury Lounge. Tickets to both NYC shows go on sale to the general public starting Friday (4/17) at noon. All dates are listed below...