photo: outside The Charleston in 2009 (more by Ryan Muir) 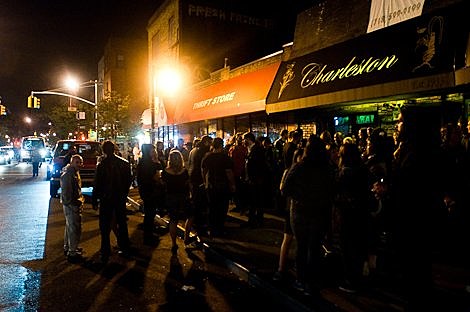 Michael Sapp, the man found beaten in Williamsburg bar The Charleston last Saturday night (6/13), died on Monday night (6/15) after being declared brain dead and taken off life support. We know he worked at The Bagel Store on Bedford/S4, but as to what happened that night, there have been conflicting reports. Gothamist has been following this story closely:

Police have not yet identified a suspect and did not respond to a detailed list of questions based on what witnesses have been telling us. Parts of what those witnesses have said are deeply contradictory, a reminder of why eyewitness testimony by itself is considered a shaky basis for criminal convictions. They are also a product of what from all accounts was a chaotic night on that stretch of Bedford Avenue, which was especially crowded because of the Northside Festival. But taken together, witness recollections, combined with the latest police narrative, suggest a basic timeline of events.