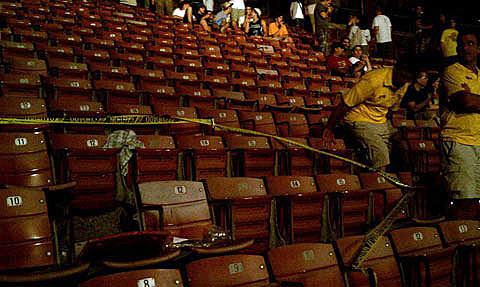 "A Phish show is the last place you expect to have a sobering experience, but there we were during the setbreak, sitting down in the General Admission section savoring the "Antelope" that closed a stellar first set, when we saw the body drop. Though the distance between the mezzanine and the seats directly below it is approximately 25 feet, the body landed much further out, in row HH, indicating that the fan propelled himself outward. One security guard guesstimated that the total distance was about 50 feet. A witness told the Post, "He pushed people out of the way and he jumped; he didn't fall. It was intentional." Fortunately, as far as we know, he didn't land on anyone.

One concertgoer who claimed to know the victim told us late last night that the man, whom he identified by the first name Luke, is in stable condition. According to the Daily News, he suffered "massive head trauma" and is "clinging to life." Another fan told the Post, "I was sitting two rows behind from where he hit. He hit a chair and he broke the back of another chair. There was blood everywhere." After the man was carried out on a stretcher, security cordoned off the area with caution tape for the remainder of the concert, which continued on schedule. It's unclear if the band was told about the incident." [Gothamist]

Yikes... As Gothamist also points out, Channel 12 on Long Island reports that the man is in "critical but stable condition." It also says he jumped. It also says they seized 49 tanks of nitrous oxide.