Man or Astroman? at MWTX (more by Andrew Frisicano) 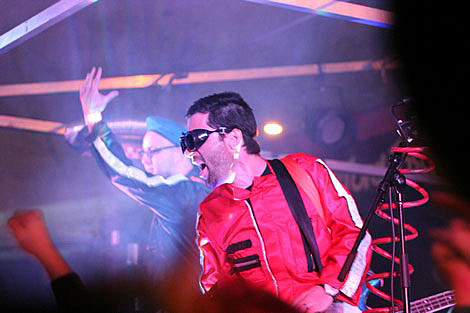 If we were in high school, I'd probably whip out a Venn Diagram to show you that the intersection of "record nerds" and "Man Or Astro-man? fans" is a pretty large. As such, Chunklet will release a new and impressive limited-to-300 7" with the songs "Earth Station Radio" and "Updated Theme To Supercar". The 7" is available when purchased with the new book Touchable Sound: A Collection of 7-inch Records - from the USA, and is packaged like a circuit board and WITH one, and in an anti-static bag.

The rare 7" and book was released (officially) at the Man or Astroman? show in Atlanta last week, but is also available directly from the publisher at a discount ($39 for the book and 7-Inch, as opposed to $45 for the book alone). To order one, paypal $39 to mike at soundscreendesign dot com).

Man or Astroman? kicking off a four-show run this week, including two NYC shows this weekend: Bowery Ballroom on November 12th (tickets) and then Music Hall of Williamsburg on November 13th (tickets). Want to win tickets to the MHOW show? I have a pair available for giveaway. Details on how to win at at the bottom of this post.

Dex Romweber Duo and Alabama duo Nightmare Waterfall will support MoA? at both NYC dates as well as in DC and Boston. In preparation for those dates, DRD also will play a solo show at Brighton Bar in Long Branch, NJ TONIGHT (11/10). Dex Romweber is best know for his time as a member of Flat Duo Jets and his current "duo" band contains his sister Sara. The pair recently dropped Live at Third Man, a new live set culled from a February appearance with Jack White at Third Man Records. Pick up a copy before these limited LPs disappear.

Tour dates, contest details and some videos are below...

Man or Astro-Man? Return to Earth!