Them Crooked Vultures at Coachella 2010 (more by Rachel Carr) 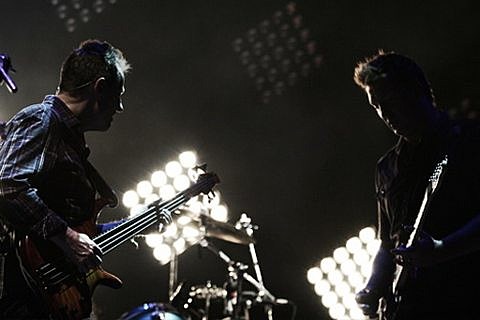 Father of two Robert McIndoe, 52, was unable to sleep for three months after going to a rock concert that left him with a permanent ringing in his ear. He was watching supergroup 'Them Crooked Vultures' at Brixton Academy.
In the coming months Mr McIndoe faced an uphill struggle to to get proper treatment for the condition, Southwark Coroner's Court heard.
His wife eventually received a letter of referral to a hospital ear, nose and throat specialist on November 1 last year - the day after he apparently killed himself.
Shirley McIndoe told the hearing that the day after the gig last July, her husband was "cross with himself" for not taking ear plugs.
She said: "When it first happened he wasn't too bothered about it because he thought it would subside, and the friend he had been with also had ringing in his ears that day.
"But it was a constant irritation.
"He didn't get a night of sleep after that until he went to hospital."-[Telegraph]