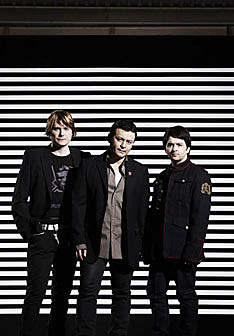 This fall Manic Street Preachers will tour the US for the first time in 10 years -- including an October 7 stop at Webster Hall. Their last NYC show was Bowery Ballroom in September 1999 in support of This is My Truth Tell Me Yours, one of the few dates of that tour that didn't get cancelled. The Manics are one of these bands who were massive in the UK, but never got more than a shrug from Americans who tend to like their bombast via Michael Bay movies, not sloganeering rock bands from Wales. I think Pitchfork's Joe Tangari sums up the band pretty well here in his review of their bsides collection Lipstick Traces...

In all of rock's varied and storied history, I can't think of another band that yearned harder and more desperately to be Important than the Manic Street Preachers. You can tell from every album they ever released, every photo they ever posed for, every line of lyrics they ever penned, that these guys wanted to change the lives and minds of millions and enter into rock's history books as nothing short of legends. From day one, they wore their politics (indeterminate though they sometimes were) on their sleeves and spoke only in Statements-- they're the kind of band who almost certainly come up with the titles for their songs before the songs are written ("If You Tolerate This, Your Children Will Be Next", anyone?), driven by ideas and philosophical concepts more than raw inspiration or restless creativity.

The band has managed to squeeze six albums out of that approach, which in itself tells you something. Back when they were just four unknowns in heavy eye shadow and feather boas with slogans scrawled on their clothes, they famously had the audacity (or was it marketing savvy?) to proclaim that they would make the greatest rock album ever and then split-- neither of which panned out, of course. Their debut, Generation Terrorists, walked a weird line between agit-punk, cock rock, romantic melodicism and glam, and was so obviously patterned after The Clash's London Calling that it was actually kind of cute. They did add a chapter to rock folklore, however, after releasing their best record (1994's tormented The Holy Bible), when lyricist Richey Edwards-- suffering from anorexia, alcoholism and a pattern of self-abuse that culminated in him carving "4REAL" in his arm with a razor blade during an interview with Steve Lamacq as a manner of addressing critics who doubted the band's conviction-- disappeared, never to be seen again. [Pitchfork]

The Manics are nothing if not earnest, but I think their need to be important was just a little much for most Americans, myself included, and the band eventually stopped trying to court us after that aborted '99 tour. (Their label never really pushed them here either.) Though remaining popular, the spectre of Richey Edwards has hung over the band since his disappearance. The band face it -- or embrace it -- on their new album, the Steve Albini recorded Journal for Plague Lovers, which features previously unused lyrics that Edwards penned shortly before he vanished and has received some of the highest praise the band have seen since This is My Truth Tell Me Yours. It's not likely to change anyone's minds about the band either way, but if you're a fan... you probably already have it and love it.

All tour dates under some music videos...

Manic Street Preachers - Everything Must Go