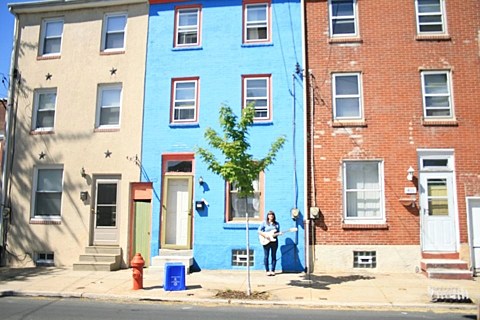 Philly lo-fi trio Manors are a pretty stripped down, straightforward group, but there's a depth to the songwriting that goes beyond what a description like that may imply. Singer/guitarist Dayna Evans has a way with words, and a striking voice that makes a minimal song like "But You Know That" stick out as one of the grandest. And the sweeping harmonies of a song like "Tomorrow" (according to bandcamp, she does her own backup vocals) also hint at something greater than your average indie pop band. This past May, the band released their debut LP, Fit In, and you can stream that in full below.

They've got some upcoming shows scheduled, including the just-mentioned Brooklyn Night Bazaar (12/14) show with Diarrhea Planet, Purling Hiss, and Big Ups, which is free and all ages. (They also opened the Philly stop on the Diarrhea Planet/So So Glos tour.) But you can also catch them in NYC much sooner than that, because they'll be playing the previously discussed Palehound / Spook Houses show happening at Muchmore's on Saturday (11/16), which also includes Toons and Dead Wives (featuring Speedy Ortiz's Mike Falcone). That show is $7 at the door and also all ages. More info at the Facebook event. All of their dates are listed below.

For Palehound, that's one of a few upcoming dates, that also include other Brooklyn shows on December 8 at Death by Audio with Bluffing, Frankie Cosmos, and Butter the Children; and January 11 at Silent Barn. During CMJ, Palehound filmed a live-in-studio version of "I Get Clean," which you can watch, along with their list of dates, below.

All lists of dates, along with the Manors LP and Palehound video, below...

Palehound - "I Get Clean" at SweetSounds Studio