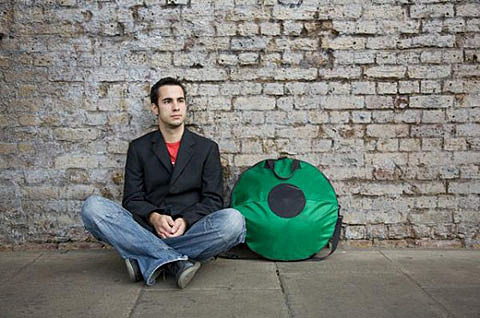 London-based Hang player/composer Manu Delago has been the hang player for Bjork's Biophilia shows, including her upcoming Roseland Ballroom shows. While he's in NYC, he's also playing other shows including one at Rockwood Music Hall TONIGHT (2/21) after Chris Thile-collaborator Michael Daves and before Alia Shawkat of Arrested Development.

Oh, and Delago's Rockwood set is with Graduale Nobili and special guests. You might know Graduale Nobili as the Icelandic girls choir who also perform with Bjork at the NY shows. They recently blogged:

"We also have a new piece by our very good friend and Björk's percussionist, Manu Delago. He wrote this piece for hung and choir, and its awesome, to say the very least."

Expect them to perform that tonight. No word on who the OTHER "special guests" are (I mean we can guess... more like hope, but without confirmation, we don't want to start any rumors) (and it will be amazing no matter what).

Manu Delago also performed in NYC last week at Joe's Pub (2/17) with bass clarinetist Christoph Pepe Auer. A video from that show of them playing a medley of Fallin', Lady Marmalade, and Crazy in Love, and all dates below...