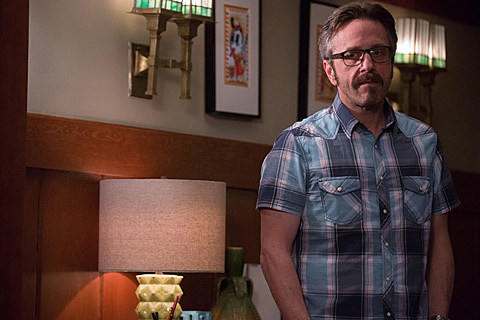 Hot on the heels of his historic (somewhat controversial) interview with President Obama on his WTF podcast, Marc Maron is in the NY-area this week as part of his "Maronation Tour." It will stop at Port Chester's The Capitol Theater tonight (6/25), and then Brooklyn Academy of Music on Friday (6/26), plus shows at Huntington, NY's The Paramount on Saturday (6/27) and Red Bank, NJ's Count Basie Theatre on Sunday (6/28). Although BAM is sold out, tickets are still available The Cap, The Paramount and Count Basie Theatre. For more Maron, you can also watch Maron, his IFC sitcom that's currently airing in its second season, tonight at 10 PM Eastern.

If one funny white guy with facial hair wasn't enough, he's bringing the hilarious Mike Lawrence to open for him for all four NY-area dates. Lawrence, a local comic who has been touring like a mad man ever since the 2013 release of his Comedy Central Half Hour (watch a clip below), will also be at Carolines on July 19 (tickets).

All Marc Maron and Mike Lawrence tour dates are listed below...