Marc and his daughter in London 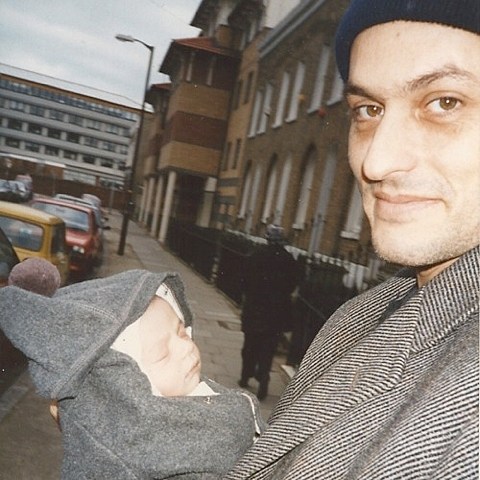 In protest of the government shutdown (which, among other things, is reportedly cancelling tours), genre-defying guitar great Marc Ribot (known for work with Tom Waits, John Zorn, Arto Lindsay, and many more) is now offering up a free download of his Affordable Health Care Act song, "Aint Gonna Let Them Turn Us Round" from his band Ceramic Dog's 2013 album, Your Turn, which is out now via Northern Spy. The song can be downloaded for free above, and a stream of it, along with a letter from Marc about the song, can be found below.

Marc just did some local dates with John Zorn, and though he's over in Europe for some shows there as we speak, when he's back he'll do a 6-night run at the Village Vanguard from November 5-10. Those shows will be with his Marc Ribot trio which also includes Henry Grimes on bass and Chad Taylor on drums.

All dates are listed, along with the song stream and letter, below...

I never thought that much about 'health care systems' until my daughter was born on England's National Health Service. My partner and I had been living in NYC, but lacked health insurance, and couldn't get any because pregnancy was a 'pre-existing condition'. The cost- not including (pre-post natal care) at NYC hospitals was $16,000 "if everything went perfectly": we didn't have it. My partner was from England, and her mom lived in South London, so off we went.

Lewisham Hospital isn't in a rich area, and it wasn't as squeaky and new as some in the US- but the care was great: they had a better licensed mid-wives program than any I've seen. both midwives, nurses, (and even the doctor!!!) visited us at home both before and after the birth. And it was all free.

My daughter was born at around 2am after a difficult labor, and the next day my partner was having trouble sleeping in a room with other moms and babies. So, I asked if it would be possible to get a private room. I misinterpreted the nurse's quizzical expression, and quickly added, 'oh don't worry, we can pay for it'... At which point she stiffened her back and raised her chin in the way only an English nurse can, and, looking at me with a combination of pity and disgust, replied: " sir, we have no private rooms. We have single rooms, and they're available based on need, not ability to pay. If your wife needs a single room, i'll make sure your she gets one."
When I thought about it, something clicked in my brain. How could we have ever even thought of doing things differently?

The National Affordable Health Care Act is, unfortunately, no NHS. But I wonder if any of the Republicans ranting about 'socialism' have any idea of what it is that they're willing to blow up the economy in order to avoid. And so I wrote this little tune. (even libertarians can dig the rhythm section groove ;-)
-Marc Ribot