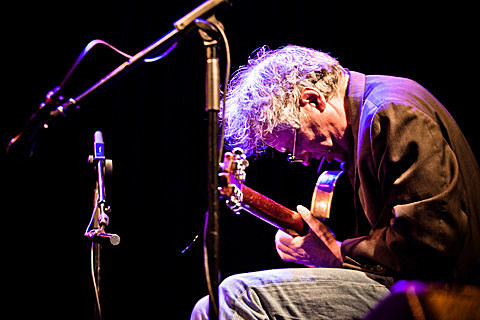 Avant guitar great Marc Ribot will assemble the Marc Ribot Trio (with Henry Grimes and Chad Taylor) for a six-day stint at NYC"s West Village jazz institution Village Vanguard from June 26th - July 1st. There he'll visit pieces from Coltrane's Sun Ship as well as delve into his signature improvisational style. Tickets for all shows, twelve in total (an early and late showing per day), are still available.

You might be thinking that it's weird for Marc to be playing the Village Vanguard, well so does he...Marc says to the Voice...

You know, it's funny. The possibility of playing there came up when I did the Allen Toussaint gig. To tell you the truth, I never really viewed it as a possibility, and even after I was invited, I thought, well, do I have a project that belongs there? Which was not slighting me or it. I respect what I do and I greatly respect both the history and the present of the Vanguard. In fact, when I first came to New York, I used to sit on the steps of the Vanguard, listening to, like, Jim Hall or whoever was playing there until I'd get kicked out. [It was a] cheapo way to kinda sit on the steps upstairs and catch some of the set. [laughs] Before somebody came and chased me away. So in that sense, you might say I have a long relationship with the place. I always figured that I was a jazz musician in the same sense that Cindy Sherman was a fashion model. So I wasn't sure if I was right for the Vanguard.

But then, this past fall, I did this tour with Henry and Chad... My music has had a close relation with jazz for a very long time. For example, the music of Albert Ayler, which was considered jazz by some critics at the time and was not considered jazz by other critics at the time. One of the things that interested me in Ayler was translating it to the guitar. And so at times, we sounded more like some kind of punk band than what was recognized by most people as jazz. So I wasn't sure whether it would be a good fit. But I did a tour this last fall, with Henry and Chad, and I started thinking, "You know, maybe we do have something to say within the tradition." And so that's why we're here. It's a funny thing to think, you know, after practicing for forty-five years. [laughs] Some people are just late bloomers.

The rest of that interview is at the Village Voice.

Ribot will also soon embark on a tour with/as Marc Ribot Y Los Cubanos Postizos and Allen Toussaint's Bright Mississippi, though none in NYC with those crews. Check out Ribot's full tour schedule below along with a few videos.