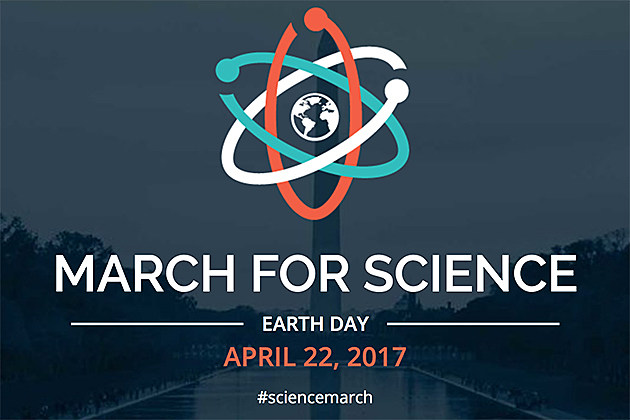 Inspired by the huge turnout for January's Women's Marches and the 2014 People's Climate March, on Earth Day (4/22) the March for Science will happen in Washington DC, as well as in over 500 satellite marches in cities worldwide. The mission of the march is as follows:

The March for Science champions robustly funded and publicly communicated science as a pillar of human freedom and prosperity. We unite as a diverse, nonpartisan group to call for science that upholds the common good and for political leaders and policy makers to enact evidence based policies in the public interest.

The March for Science is a celebration of science. It's not only about scientists and politicians; it is about the very real role that science plays in each of our lives and the need to respect and encourage research that gives us insight into the world. Nevertheless, the march has generated a great deal of conversation around whether or not scientists should involve themselves in politics. In the face of an alarming trend toward discrediting scientific consensus and restricting scientific discovery, we might ask instead: can we afford not to speak out in its defense?

People who value science have remained silent for far too long in the face of policies that ignore scientific evidence and endanger both human life and the future of our world. New policies threaten to further restrict scientists’ ability to research and communicate their findings. We face a possible future where people not only ignore scientific evidence, but seek to eliminate it entirely. Staying silent is a luxury that we can no longer afford. We must stand together and support science.

The March for Science's core principles include "science that serves the common good; evidence-based policy and regulations in the public interest; cutting-edge science education; diversity and inclusion in STEM; open, honest science and inclusive public outreach" and "funding for scientific research and its applications." While it's goals aren't necessarily partisan, the March itself is definitely political. According to Climate Central:

Trump’s election was a clear catalyst for the march, as were his subsequent attacks on science through his rhetoric, cabinet appointments and proposed budget. Organizers and partners have emphasized that while the march is political, it is not aimed at being partisan. Rather, they see the march as a way to catalyze support for evidence-based policymaking and against a growing anti-expert sentiment.

The Washington DC March for Science starts at 9 AM on 4/22, north of Washington Monument, Constitution Avenue NW between 15th and 17th street, with a teach-in and rally; the march itself begins at 2 PM. More details and registration through the official site. You can also stream the premarch rally from 10 AM-2 PM.

The NYC Satellite March starts at 10:30 AM with a rally on Central Park West and 62nd St, and the march itself starts an hour later, at 11:30 AM, and goes from Central Park West and 72nd St to Columbus Circle, finishing at 52nd St and Broadway. Registration is open. For other cities, check the list of satellite marches.

If you're attending weekend 2 of Coachella and want to march, you're in luck, because there is an officially recognized Coachella Satellite March for Science. Sign-making starts at 10:30 AM and the march starts at 11:30 AM at the Art Studio in the Camping Center. See their facebook page for more details.

There's no equivalent to the pink "pussy hats" that were ubiquitous in January to wear while marching for science, but some enterprising knitters have come up with brain hats, hats with zigzags representing a resistors in circuitry diagrams, and hats with double helix patterns to representing DNA. Bill Nye can also be seen wearing the official science is universal t-shirt, sales of which benefit The Planetary Society.

In other upcoming protest news, on Tax Day, Saturday (4/15) people will march in Washington DC, NYC, and other cities to demand that Trump release his tax returns.