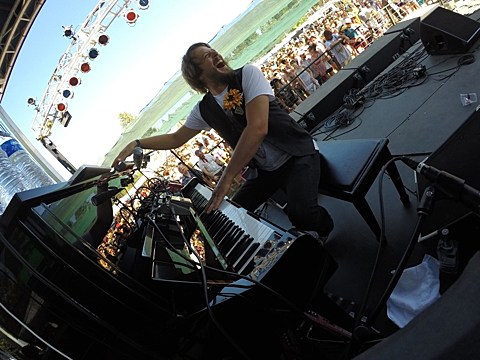 The prolific Marco Benevento has been at it for over a decade, playing with The Grateful Dead's Phil Lesh, Phish's Trey Anastasio, Joe Russo and more. He's also a solo artist, and his next album The Story of Fred Short (Fred Short is the name of the upstate NY studio he founded) is due out in April 2016. His ties to the jam world are obvious, but there's an indie rock element to Benevento's work too. When reviewing the Benevento/Russo Duo's 2007 album for Pitchfork, Grayson Currin wrote:

Indie rock bands are playing jam festivals because the pay is good. But indie kids don't typically go to jammy shows, and indie rock is defined less by qualities and sounds than qualifiers and scenes. We're at a point when everything-- from robed cults in choirs and polyrhythmic harpists in animal skins to cantankerous bands bleating about child stars and splintery trios playing math rock-- is deemed "indie rock." And, even if they're avoiding the mantle while gigging with Anastasio, the Benevento/Russo Duo is bold indie rock for right now.

He also compares it to "an instrumental Arcade Fire." The argument that this jam bander is making bold indie rock remains strong on "Dropkick," the first single from Benevento's new album which premieres in this post. It's lightly psychedelic pop that could appeal to Damon Albarn fans as much as (or more than) Jerry Garcia fans. The song comes out as an official single digitally and as a 7" (backed by a cover of The Crystals' "Little Girl") on November 27 (pre-order), but you can listen below now.

Benevento has dates coming up, including one in NYC this month. He and his band will be opening for Lettuce on night two of their two-night stand at Playstation Theater (11/14) (tickets). Then, he and Nicole Atkins team up for a holiday spectacular at Asbury Park's Stone Pony on December 5 with Deal Casino and special guests (tickets). All dates are listed below.