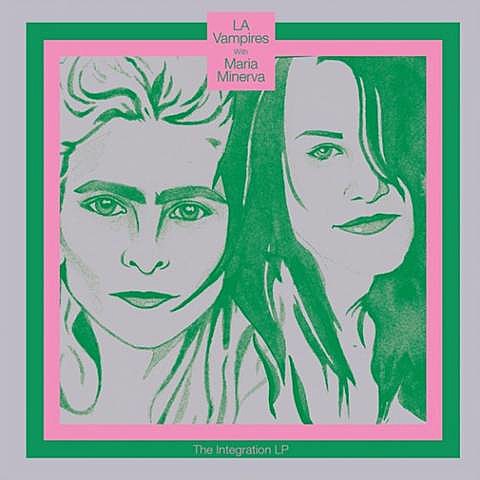 As mentioned, warped pop singer Maria Minerva is releasing a collaborative album with Not Not Fun/100% Silk label head LA Vampires (aka Amanda Brown, formerly of Pocahaunted) called The Integration. The album will be out digitally and on vinyl on October 30 and it comes out on CD on November 13. GvsB just premiered the video for the album's single, "Seasons Change," which you can watch below. That's the cover art above and the tracklist is below.

Maria Minerva is playing a number of CMJ shows this week (maybe you saw her at the Panache showcase at Public Assembly on Wednesday or at Trip House or Le Poisson Rouge last night?) and you still have some chances to see her. She plays the Ad Hoc unofficial showcase at 285 Kent tonight (10/19) with Solar Year, Prince Rama, Le1f, Physical Therapy, Mykki Blanco, and Pictureplane (DJ). I just caught Prince Rama, Mykki Blanco, and Pictureplane (though it was live a set) at the Terrorbird party at Cake Shop on Wednesday and they were all great, plus Maria Minerva doesn't disappoint in a live setting, so that showcase is looking like a pretty solid show. $8 at the door.

Maria plays the 285 Kent show at 9 PM and after that she'll head to Delancey for a 12:30 AM set at the Underwater Peoples showcase with La Big Vic, Future Shuttle, Ian Drennan, and Limited. $5 at the door.

Then, as mentioned, Maria will play the Life or Death showcase at 92YTribeca on Saturday (10/20) with Kilo Kish, Sky Ferreira, Mac DeMarco, DIIV, Twerps, Starred, Dogbite, Slug Guts, and Jozef Van Wissem. $10 at the door, or you can try to get in with your CMJ badge.

A list of all dates, that video, and the album tracklist are below.

The Integration Tracklist:
1 Integration
2 End Of The World
3 I Fear Thy Kisses
4 Alien In My Heart
5 The Immoral Mr Tease
6 Seasons Change
7 Trying 2 Be Honest With Myself
8 Supercool
9 Desire Desire
10 A Lover & A Friend