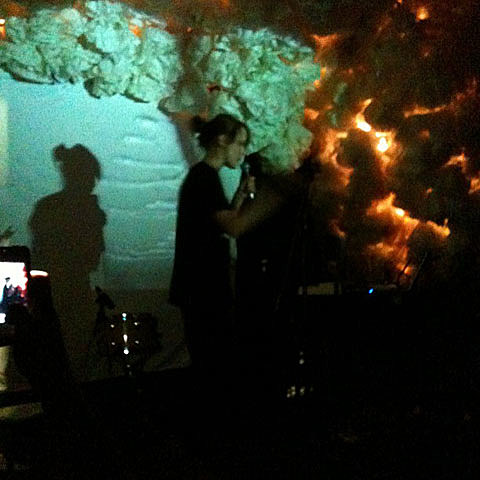 London-via-Estonia's Maria Minerva made her US live debut at Glasslands last night (4/22) as part of the Unsound Fest closing party. The stage was lit up by an original video montage which included clips of highway driving, old music videos, and tropical storms as Maria performed solo with her laptop/samplers/keyboard and an effected vocal mic which soaked her voice in reverb and delay. Though Maria is a producer and had the stage setup of one, she opted for more of a pop performance, spending most of the time away from the boards and focusing on her voice which rotated between speak-singing and a floaty falsetto. And while visuals for some electronic artists have become "what you watch" at their shows, for Maria they only added to her own performance, which included dancing on stage, standing on chairs, and charismatic gestures.

Like Neon Indian or Toro y Moi, Maria Minerva is looking back on nostalgic pop music through a psychedelic lens. She creates dense, hypnotic atmospheres in virtually all of her music, yet seeing her perform it in front of clips that hearken back to the days where MTV actually played music videos, it's hard not to wonder how many cues she takes from those groups that were on MTV. This isn't a totally foreign concept--Grimes and Zola Jesus have achieved similar feats--but Maria does it really well and there's something very pleasing about music that can be perceived as intelligent while hitting the spot filled by pop. In addition to those nostalgic pop video moments and the samples in her songs, she's quite referential. Because of the effects on her voice, it wasn't always too discernible, but when it cut through I could make out some other allusions to pop culture. The most notable one came when she nicked The Kinks' lyrics on her final song of the night by repeating, "Boy, you really got me going/you got me so I don't know what I'm doing/yeah, you really got me now/you got me so I can't sleep at night," to her own rhythms and melodies.

a Sun Araw vs Heat Wave DJ set, along with Napszyklat and DJ Elton John, opened the night. Watch some Maria Minerva videos below...