Mark Sultan at Bowery Ballroom in 2009 (more by Tim Griffin) 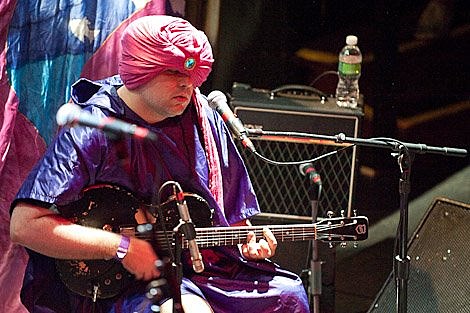 With King Khan and BBQ apparently going their separate ways, BBQ (aka Mark Sultan) has scheduled a one-man-band tour of his own.

King Khan and BBQ were originally scheduled to play shows this month, including one at the Bell House, but those were all cancelled and an October King Khan and the Shrines tour quickly showed up instead.

Now Mark 'BBQ' Sultan, who released his new LP $ via Last Gang Records (Metric's label) earlier this year, has an October tour of his own including an October 16th early show at Mercury Lounge in NYC. Tickets for that show are on sale now. The tour ends with Mark opening a bunch of dates for Deer Tick.

Mark also has a track on a new Nolan Strong tribute album. Nolan was a 50's R&B singer, and his fans (other artists who contributed songs to the album) include Lenny Kaye, Reigning Sound, Gentleman Jesse, A-Bones, and the Dirtbombs. Order the album at The Wind Records. Grab Mark's track for free above.

DADDY ROCKIN STRONG: A TRIBUTE TO NOLAN STRONG & THE DIABLOS Track list:
SIDE A:
Mark Sultan - "The Wind"
Dirtbombs - "Daddy Rockin' Strong"
Cub Koda - "You're the Only Girl, Delores"
Outrageous Cherry - "Yeah Baby, It's Because of You"
Andre Williams & the A-Bones - "The Way You Dog Me Around"
Danny Kroha & the Del Torros - "Do You Remember What You Did"

SIDE B:
Reigning Sound - "Mind Over Matter"
Wreckless Eric & Amy Rigby - "I Want to be Your Happiness"
A-Bones - "Real True Love"
Hentchmen - "Mambo of Love"
Demon's Claw's - "Try Me One More Time"
Gentleman Jesse & His Men - "Harriett, It's You"
Lenny Kaye - "I Wanna Know"