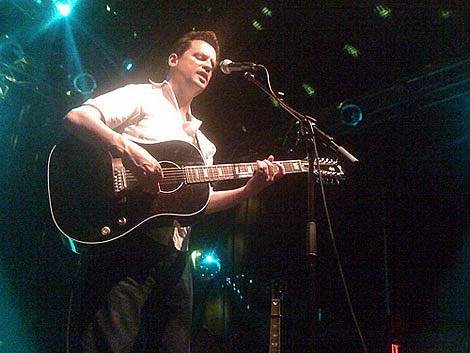 Mark Kozelek of Sun Kil Moon and Red House Painters will perform at the Music Hall of Williamsburg on Thursday, August 6th. Tickets for the seated show go on sale Friday, April 24th at noon.

Kozelek just put out a live disc, Find Me, Ruben Olivares: Live in Spain, on April 1st. He'll be releasing another live record, Lost Verses Live, on Tuesday, May 12th (digitally on May 1st). Both of those albums are on his own Caldo Verde label. The label's Myspace is currently streaming the first two tracks off Lost Verses Live. About that record...

Recorded live during Mark Kozelek's 2007 and 2008 acoustic tours with Sun Kil Moon/Red House Painters guitarist Phil Carney as accompaniment, this 14 song, 74 Minute set includes tracks primarily chosen from the Sun Kil Moon catalog but also includes solo and Red House Painter's songs. The album was recorded in intimate, seated settings such as The First Unitarian Church in Philadelphia, The Williamsburg Music Hall in Brooklyn, The Palace of Fine Arts in San Francisco and the Aladdin Theatre in Portland.

As Sun Kil Moon, Kozelek will be playing a few dates in May, too. Those include a stop at Sasquatch Fest in Seattle on May 23rd.