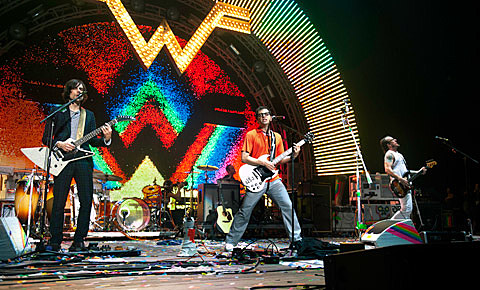 So it turns out that totally awesome cruise that Mark McGrath was going to do with a redonkulously stacked lineup of Smash Mouth, Sugar Ray, Gin Blossoms, Spin Doctors, Vertical Horizon, and more isn't going to happen after all. "It's a real bummer," says Mark McGrath. We feel you bro, a real bummer for sure. Mark blames "that poop cruise" (aka the Carnival cruise that got stuck at sea) for the cancellation. Can you imagine what would have happened if Mark McGrath's cruise got stuck at sea? Would Smash Mouth just play "All Star" on repeat until we got home to encourage us? Alice Cooper cancelled a cruise recently too. Can you imagine if that one got stranded at sea?

Still, other cruises are alive and well, as evidenced by Weezer, whose Weezer Cruise is returning for a second run from February 13-17, 2014 from the coast of Jacksonville, FL to the Bahamas, just over two years after its inaugural cruise. How can Weezer's cruise still happen after that poop cruise ruined cruises forever? Maybe the real reason is Weezer books bands people care about now (the first cruise had Dinosaur Jr., The Antlers, Yuck, Wavves, and more) and Mark McGrath books bands that no one has listened to since people actually bought Now, That's What I Call Music! CDs. Weezer hasn't announced their lineup for this year yet, but we're assuming Sugar Ray and Smash Mouth aren't going to be on it. A trailer video for Weezer's 2014 cruise (which includes info about when tickets go on sale) is below. Stay tuned for the lineup.

--
P.S. Mark McGrath turned his cruise into an on-land tour but seriously, no one cares.