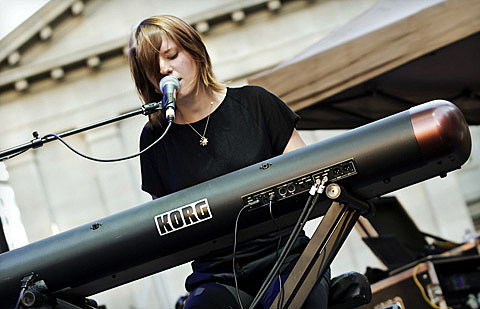 The Swell Season's Marketa Irglova is working on her second solo album, entitled Muna, and she's just announced a one-off NYC show at Le Poisson Rouge on October 10. She'll be joined by a band and playing songs from the upcoming release, as well as stuff from her last solo album, Anar, and some promised "old favorites" (one would imagine that would indicate some stuff from Once). Tickets for the show go on sale Friday.

In semi-related news, more folks than not first heard Marketa from the 2006 film Once which costarred Glen Hansard of The Swell Season. That film's writer/director, John Carney, has a new film out this summer that also mixes music and romance. Begin Again stars Mark Ruffalo as a washed up music biz exec and Keira Knightly as a singer/songwriter he discovers. The films also features CeeLo Green (who plays with Lionel Richie tonight at Jones Beach), Yasiin Bey (aka Mos Def) and Maroon 5's Adam Levine. The film opens around the country on Friday (6/27) and you can watch the trailer below.