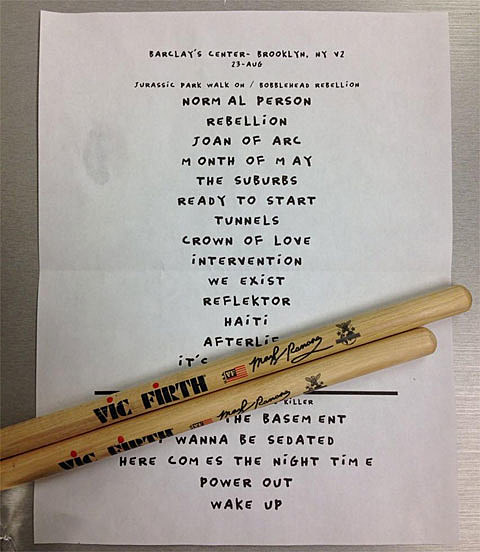 Keeping the CBGB-special-guests-and-covers theme going in NYC, Arcade Fire brought out Marky Ramone to play drums on two Ramones covers during the encore tonight (Saturday) at Barclays Center in Brooklyn. The covers were "I Don't Wanna Go Down To The Basement" and "I Wanna Be Sedated". Right before that there was a tribute to the Talking Heads which included "Psycho Killer" playing while a "Stop Making Sense" David Byrne video-head character came out on stage in a suit with a boombox by his side (they've also played with the real David Byrne before). You can see the full night's setlist above, and watch video below.

Marky Ramone started drumming for the Ramones after original member Tommy Ramone left the band in 1978. Tommy, the last living original member of the band, died earlier this summer.

A photo of Win and Marky from the show's soundcheck, below...