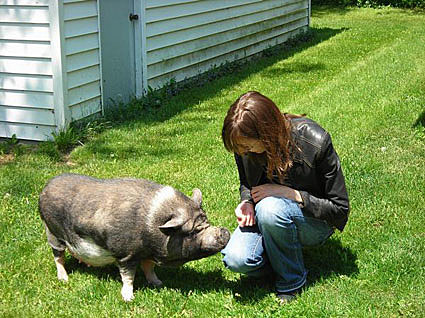 These songs are from my solo project, but I perform with lots of other groups too. I'm the violist for My Brightest Diamond, and I played viola for "Bring Me the Workhorse," her latest record. I also perform with Sufjan Stevens, and recently had the honor of being a member of the Magical Butterfly Brigade. You can hear me on "Illinois," and also on his new Christmas record (vol. 5, playing and singing!) I'm singing on "Boxer," the new record from the National, and I perform all over NYC with my good friend Sebastian Krueger's project Inlets. I have also worked with Devotchka, Clare and the Reasons, Oneida, The New Pornographers, Duncan Sheik, and many other bands in the New York area. I even got to rock it with Jay-Z at Radio City Music Hall last year, and with Kanye West on SNL. [Marla Hansen]

Get to the National early tonight! Look for Marla in Sufjan's orchestra at BAM. Stay tuned for more info on the artists playing the BrooklynVegan party upstairs at Pianos on October 20th.