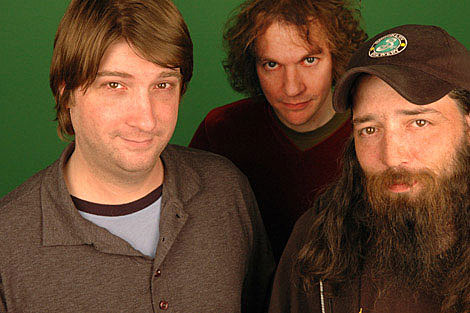 Long-running Indianapolis band Marmoset will be in New York next week as part of a short East Coast tour supporting their sixth record, Tea Tornado, their first for Joyful Noise records. Like their previous albums on Secretly Canadian, Tea Tornado displays a heavy Brit influence with a distinctive, almost sinister tone. I asked former Indianapolis resident (and current World Without Magic frontman) Patrick Bower what he remembered about Marmoset from his time there:

Marmoset are one of the few bands from my time in Indianapolis that I count as "authentic," by which I mean they lived the life. They just made music constantly in their home studio near my house in Fountain Square and were never really part of the (largely non-existent) scene. I'm glad [Secretly Canadian's] Chris Swanson believed in them enough to keep putting out their records, despite the fact that they never really toured. I count The Record in Red as a bone fide classic, almost a perfect record. I remember seeing them in college before any of my bands got going, and I remember being struck by how creepy they were. It gave me the same feeling as watching Jandek or maybe Wesley Willis. To their credit, they maintain that eeriness to this day.

As Patrick notes, Marmoset don't tour much so go see them while their out of their nest. They play Cake Shop on September 9 (Wednesday) and Bruar Falls the next night (9/10). There's a few MP3s at the top of this post -- "Peach Cobbler" is from their new Tea Tornado, the others are from their Secretly Canadian days, and you can also download a live album (ZIP) as well. All dates below...