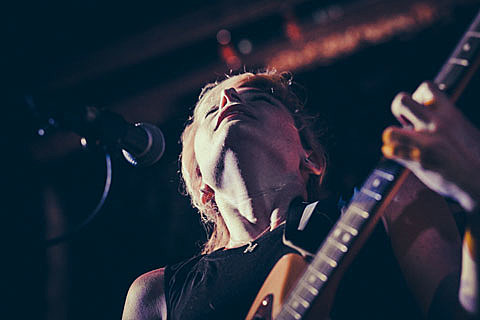 As previously discussed, Cincinnati garage pop punks Tweens are going on a June tour which includes the Gothamist/Impose Northside Festival show at Rough Trade NYC on June 13 with Amanda X. Since we last spoke, that show has gotten even better: the queen of guitar heroics and sexual stage banter, Marnie Stern has been added to the bill. She's playing solo. Tickets for that show are still available, and you can also try to get in using your Northside badge.

Tweens have also just announced an August tour with Crocodiles (whose members have been busy with side projects this year). That tour doesn't hit NYC, but the list of all places it does hit can be found below.

Crocodiles do play NYC without Tweens though, first on July 24 at Death by Audio and then again on August 31 at Baby's All Right during their brief run with Sandra Vu's (of Dum Dum Girls) band Sisu. (Brandon of Crocodiles is both married and in a band with Dee Dee of DDGs.) Tickets for the Baby's show go on sale today (5/30) at noon. No advance tickets for the DbA show.

In related Crocodiles news, Wartime (Chuck from Crocs' solo project) just made a video for single "(War)time Won't Let Me" and you can check that out below.

UPDATE: A previous version of the post listed the Baby's All Right show for July 25. There was a mix up and the date is in fact August 31.

All dates are listed, with the Perfect Pussy remix of Tweens, below...