Marnie Stern at Santos in 2011 (more by Andrew St. Clair) 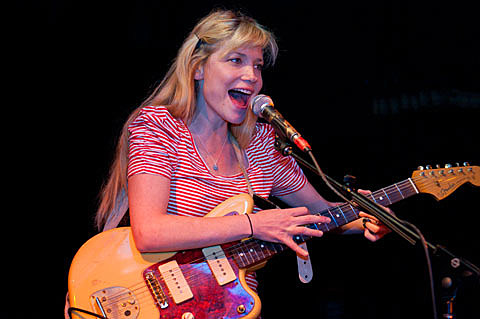 Looks like it's unofficial math rock day on BrooklynVegan. After we just posted that Tera Melos and TTNG are touring together, Marnie Stern (who's also toured with Tera Melos) announced a tour too. Hers is in support of her new album, The Chronicles of Marnia, which is due out on March 19 via Kill Rock Stars. The tour hits NYC on April 11 at Music Hall of Williamsburg. Tickets for that show are not on sale yet but check ticketmaster for updates. The tour also includes a Chicago date, which BrooklynVegan Chicago is presenting. Many of the shows are with Roomrunner, but no opener has been announced for the NYC show yet. All tour dates (via Pitchfork) are listed below.

Marnie also just revealed a third track off of The Chronicles of Marnia called "Nothing is Easy." It starts off with Marnie's trademark math-rock-meets-Van-Halen tapping, but quickly turns into a subtler art rocker. You can stream that song below, and revisit the two previously revealed cuts, "Year of the Glad" and "East Side Glory," HERE.

Marnie Stern - "Nothing is Easy"

* with Roomrunner
# with Motel Beds
^ with Barren Girls