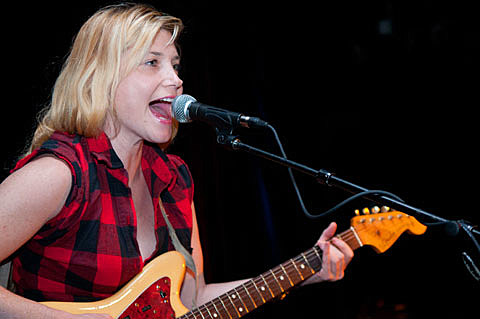 "With the advent of punk, epic, virtuosic music was seen as both formally pompous and politically élitist. But instrumental prowess is no more or less primal than a three-chord crunch. Stern and her inspirations, like the drums-and-guitar cascade of the nineties indie-rock band Don Caballero, have rescued the exuberant excess of progressive rock by filtering it through punk's dissonance and speed. It was an elegant leapfrog--now bands like King Crimson are more relevant and widely referenced (by musicians as unlikely as Kanye West, who sampled Crimson on "Power") than formerly dominant post-punk figures such as Elvis Costello and Paul Weller." [Sasha Frere-Jones]

Finger-tappin' Upper-East-Sider Marnie Stern will link up with Tera Melos to play a string of US dates that include Santos Party House on March 4th. Ticketing info is forthcoming.

Tera Melos are prepping a new six-song EP, Zoo Weather, due via Sargent House in February. The cassette/digital release will feature a three new songs alongside three remixes, including a remix from Japanese noise greats Melt Banana.

Marnie Stern released her self-titled LP in 2010 and celebrated with a show at Rock Shop, She called Tera Melos's Patagonian Rats her favorite LP of last year. Stream it below and decide for yourself, and check out all other tour dates while you're at it...