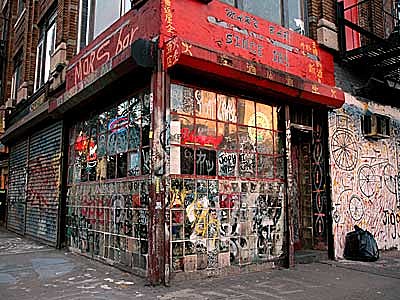 Sad news you may have read back in December:

As the [LES] became gentrified -- a Steve Madden shoe store and the posh Rivington Hotel have helped bring a commercial sheen to the artsy quarter -- Max Fish and Pink Pony remained popular.

But [in December], the two Ludlow Street colonizers announced they will shutter Jan. 30 because of a steep rent increase. And nearby, Mars Bar, at First Street and Second Avenue in the East Village, is also set to close as plans to redevelop the site into a mixed-income condo move forward.

Mars Bar -- a dingy saloon famous for cheap brew, punk rock and its lack of toilet paper -- could reopen in two years but would have to negotiate a market-rate rent with the developer. The community board is scheduled to vote on the proposal later this month.

"The Lower East Side felt like it was over a while ago, but [Max Fish] is a very symbolic closing," said author Richard Price, who used the neighborhood as a backdrop to his best seller "Lush Life."

"There are no neighborhoods in Manhattan anymore. South of Harlem, it feels like a bunch of districts where rich people can crash." [NY Post]

That said, the LES still remains the best neighborhood for live music outside of Brooklyn thanks to Cake Shop, Pianos, Living Room, Rockwood Music Hall, Arlene's Grocery, Mercury Lounge, the Delancey, and the new Tammany Hall to name a few.

And as far as Mars Bar... I'll be sad to see it go, but like CBGB before it, does it even matter at this point? No disrespect to the owners, but Mars Bar sticks out like a sore thumb now that everything around it has already changed. It hasn't felt the same for a long time, even if it still looks exactly the same on the inside.