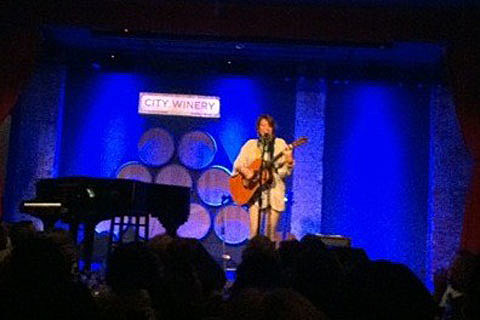 Nath-Ann Carrera started the night off with a handful of songs that inhabited a unique place between standard country western ballads and bizarre gay-themed narratives. It was clear from his opening monologue that this was a performer who was about more than just the music (he stepped out, barefoot, in a short white gown and brown headdress.) Carrera performed songs by Hank Williams and Townes Van Zandt, but was at his best when spinning original yarns that were as sharp and strange as his on-stage persona. (One involved a lesbian kidnapping Frank Sinatra, skinning him alive on a meat hook, and using it to make handbags to sell to hippie boutiques.)

Martha Wainwright, who was playing her 2nd November City Winery show, came out in a short dress of her own - perhaps inspired by Nath-Ann, and perhaps unaware of how close the front row was to the stage. She joked with the gentlemen in the front about how they were getting a special show thanks to her "genetic leg kick." (Martha, like her father Loudon, tends to jerk her left leg up while playing...) Wainwright performed songs from her two studio albums as well as a handful of new songs slated for her upcoming yet-to-be-completed record. Wainwright has come a long way since her original role as the perennial family back-up singer. Her two records have received critical acclaim worldwide, and she has created a second career for herself interpreting the music of Edith Piaf. It seems Piaf's music is where Wainwright has found her true inspiration as a singer, as her songs are filled with the same emphatic, dynamic emotion. Wainwright's ability as a vocalist shined as she showed a control over her voice that held the crowd entranced. Her banter between songs also showed off a brash sense of humor and comfort, providing comic relief between some pretty intense moments. The height of which was her performance of her late mother's classic "Talk To Me Of Mendocino," which walked the line between devastating emotion and soaring melody.

The second half of the set, which also included a guest appearance by Justin Vivian Bond for one song, employed the work of Thomas Bartlett (a.k.a. Doveman) on piano, who proved to be the perfect accompanist, aptly complementing Wainwright's musical tendencies with subtle, effective flair. Wainwright has developed a unique musical identity in her now-trademark style of shaking a melody out like loosening a cramp, singing over conventional yet somehow unexpected suspensions, and writing lyrics that are both personal and enigmatic. She is far more talented than her recognition might indicate (at least in the US). She possesses both precision and soul, and the ability and awareness to tastefully present it on stage. At the end of the night the crowd demanded Wainwright's return, which she granted, performing "Tell My Sister," another classic song of her mother's, and closing the night with a new original number that left the audience even more curious about what Wainwright has in store for her next record.

On December 15, the Wainwright/McGarrigle posse will join forces with Lou Reed, Laurie Anderson, and many more to present "A Not So Silent Christmas" at Town Hall. All proceeds will benefit the Kate McGarrigle Sarcoma Research Fund. Flyer below. 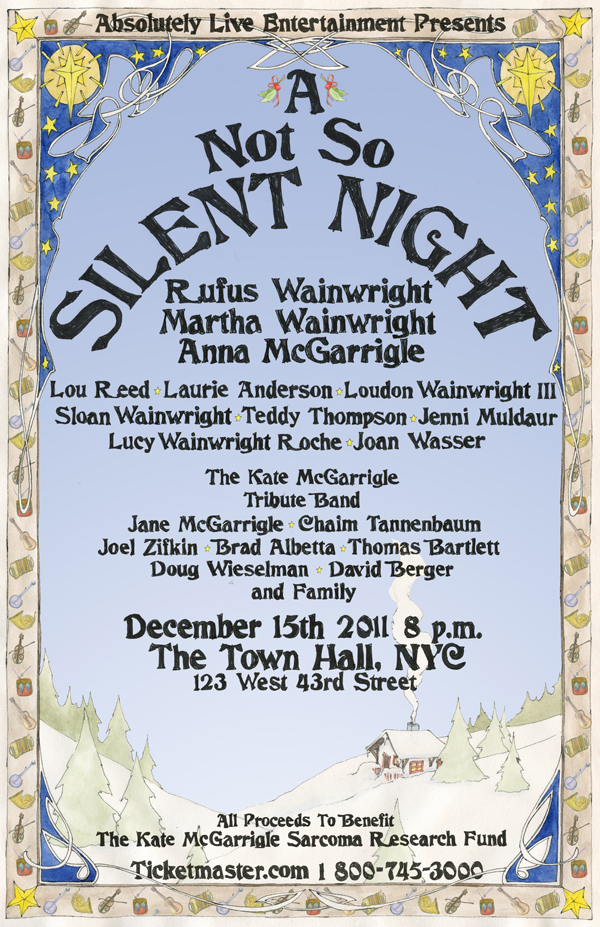