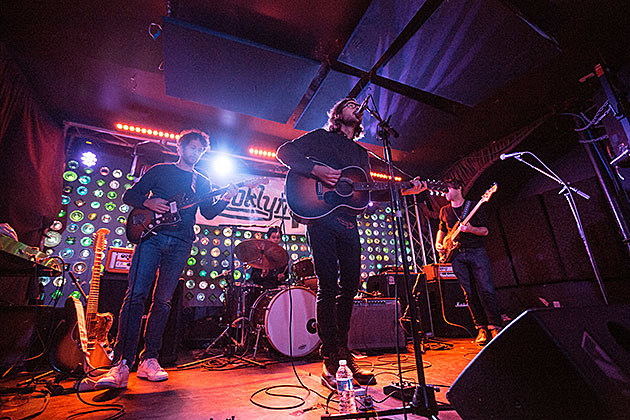 Alex Bleeker and the Freaks begin their tour in Connecticut tonight (11/11) and it hits NYC Thursday (11/12) at Brooklyn Bowl. Since we last spoke, several guests were added to that show. It now includes Steve Gunn, Alex's Real Estate bandmate Martin Courtney (who just released a great solo album), Darkside collaborator Will Epstein playing with Elvis Perkins collaborator Jesse Lauter, and King Cyst, aka Luka Usmiani of Big Troubles and Real Estate side project Ducktails. Tickets for that show are still available. Updated Alex Bleeker dates are listed below.

In related news, Real Estate are among the artists who contributed a previously-unreleased track to be auctioned off as a 7" with proceeds going to help Thomas Fekete of Surfer Blood, who's fighting cancer. The others are Guided by Voices, Yo La Tengo, Alex Somers, Lou Barlow, The Pains of Being Pure at Heart, The Ghost of a Saber Tooth Tiger, Cults, Julianna Barwick, The Drums, And You Will Know Us by the Trail of Dead, Nick Diamonds, and Surfer Blood. You can also donate $10 or more to download the tracks. More info here.

Sleigh Bells, Yoko Ono & Flaming Lips, Interpol & Shepard Fairey, Sharon Van Etten, and Angel Olsen also donated autographed items to be auctioned off, with the proceeds going to Thomas. Cymbals Eat Guitars just auctioned off a guitar at their NYC show over the weekend to donate the proceeds to Thomas too.

Thomas also has an ongoing GoFundMe campaign set up that you can donate to.

Details on the songs being auctioned below...

Guided By Voices - "Motor Away" (live)
Recorded live 6/24/94 at Threadwaxing Space, New York City on "The Insects of Rock" tour.

Real Estate - "Talking Backwards" (demo)
This was recorded in Real Estate's practice space in Bushwick in the summer of 2013. Courtesy Domino Records.

The Pains of Being Pure at Heart - "Between These Boys" (demo)

Nick Diamonds (from Islands) - "Be A Comedian"
Recorded spontaneously on September 2nd, 2015.