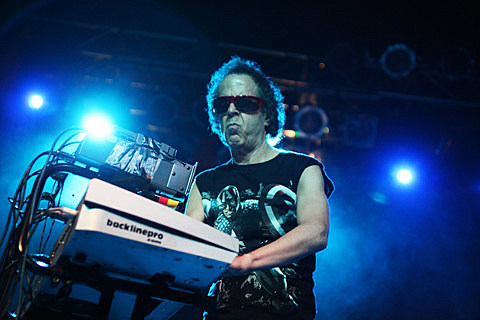 You may remember that NYC synthpunk legends Sucide were supposed to play a hometown show last year but cancelled due to illness, which means it's still been some time since we've had a chance to see them locally (though they have been somewhat active). Still no word on a NYC show from the duo, but one half of the group, keyboardist Martin Rev, will play his first solo show in NYC in five years on June 21 at The Bowery Electric. Support at the show comes from You. and Eraas who definitely owe more than a little of their sound to the groundwork Suicide helped pave. Tickets for the Bowery Electric show are on sale now. A full stream of Suicide's 1977 self titled debut and a couple Martin Rev videos below.

That same support lineup, You. and Eraas, also support ADULT. at their previously discussed NYC show on June 8 at 285 Kent. Black Marble is on that bill too. Tickets are still available. Eraas also have an upcoming Glasslands (6/29) show with Soon-To-Be Innocent Fun and Ritual Howls (tickets).

If '70s NYC punk is your thing, you may also consider heading to Bowery Electric TONIGHT (5/30), where The Dictators NYC (aka the new name of Dick Manitoba's band, which also features former Dictators Ross "The Boss" Friedman and JP "Thunderbolt" Patterson) are playing with Radio Birdman guitarist Deniz Tek, long-running Queens garage rockers The Fleshtones, and Brooklyn punks Livids (the new project of New Bomb Turks frontman Eric Davidson). Advance tickets for tonight's show are sold out, but the venue will have some tickets at the door. First come, first serve so get there early!

Videos and song streams below...

Deniz Tek - "Aloha Steve and Danno" at Bowery Electric in 2012

Livids - Your House or the Courthouse EP Stream