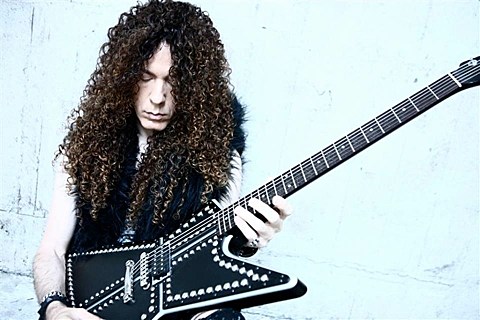 Guitarist Marty Friedman joined Megadeth back in 1990 for their classic Rust In Peace album, and as big fans of the band probably know, he left in 2000 and moved to Japan where he became very successful as an instrumental shred guitarist and TV personality. He had already been releasing solo albums during his time in Megadeth (and before that when he was in Cacophony), but he has been especially prolific since leaving the band. His most recent release is 2014's Inferno.

That's the album he'll be supporting when he finally returns to his home continent this September/October for his first tour here since 2003. Support on the tour comes from fellow shredders Exmortus.

The tour hits NYC on September 10 at Gramercy Theatre. Tickets for that show are on Live Nation/Music Geeks presale now (password: musicgeeks), and go on sale to the general public at 10 AM on Friday (7/10). All dates are listed below.

Exmortus are also on the Warbringer / Enforcer tour which hits that same NYC venue on January 5, 2016. Tickets for that one are also on Live Nation/Music Geeks presale now, and go on regular sale Friday at 10 AM.

Watch some Marty Friedman videos, with the list of tour dates, below...