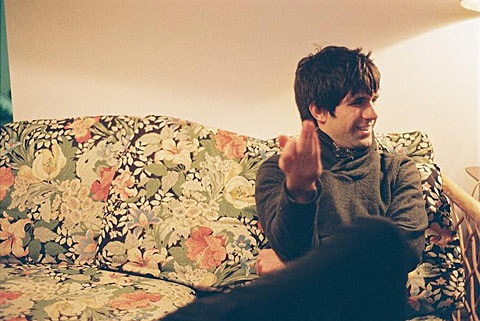 Marvelous Mark spent the latter half of the '00s as part of Toronto's Marvelous Darlings who mixed punk and powerpop garage and also featured Fucked Up's Ben Cook. He and Cook also released a 7" in 2012 on Slumberland under the name Roommates. Now on signed to Cook's Bad Actors label, Marvelous Mark continues to make ear-burrowing hooks and melodies on his own. First up is a single, "Bite Me," is the kind of song you'll be humming along with before it's over. It's being released as a lathe-cut flexi 7" (thicker than the flexis you'd get in a magazine) and on cassette. (Order yours.) That song's video makes its premiere in this post. Let's hope that more is on the way soon.

Fucked Up, meanwhile, have an impending new album and tour. Watch Marvelous Mark's "Bite Me" video (or stream it via Soundcloud) below...