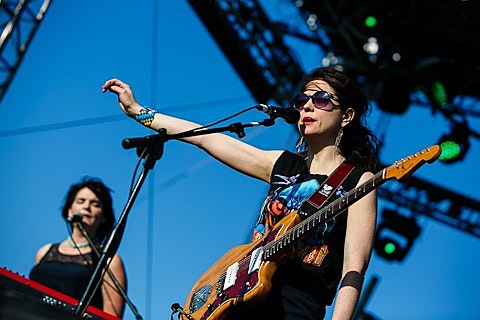 Punk supergroup Wild Flag, who released an excellent album in 2011 and did a ton of touring around its release, have been quiet this past year, but the members are still keeping busy. Janet Weiss made a new album with her band Quasi (whose tour hits NYC this weekend), and teamed up with some other drummers for Drumgasm. And Carrie Brownstein's always up to something, whether it's appearing on SNL or just working on more Portlandia.

Now, Mary Timony (who was also in Helium and Autoclave) is back out there with a new band called Ex Hex, which is also the name of her 2005 solo album that came out via Lookout! Records (via Spin). The band have released their first new song, "Hot and Cold," which is along the lines of her best contributions to Wild Flag, and is a great play on the "Crimson and Clover" riff (or the "Sweet Jane" riff or the "Fox on the Run" riff, depending on where you're coming from). Check it out below.

Ex Hex will play their first show this Thursday (10/10) at DC's Rock and Roll Hotel with Obits (ex-Drive Like Jehu/Hot Snakes), Title Tracks (ex-Q and Not U), and Cane & the Sticks. Their only other announced date at the moment is DC's Shred Fest on 10/18.

Obits also have other dates, a few of which are in NYC, including one this weekend.