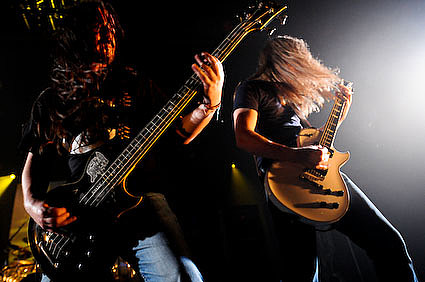 Maryland Deathfest have announced their first batch of bands for their 2013 edition, including a veritable buttload of exclusive appearances. Among those scheduled to appear exclusively at the eleventh edition of the fest are Venom, Carcass, a Righteous Pigs reunion, Antaeus (who played Rites of Darkness), Convulse, Aosoth, !Tooh!, Ahumado Granujo, and Ingrowing.

In related news, MDF 2011 alums and over-the-top death metal purists Gravehill give fuck-zero about current trends, they just want to rip, drink frothy cold ones and scare the ever-living shit out of you. The California-based band will head to the East Coast this fall to play Saint Vitus on October 26th with Hour of 13, Master's Eve and Mutant Supremacy. Tickets are on sale. So far, no details on an actual tour yet, but we'll keep our eyes peeled (pardon the pun).