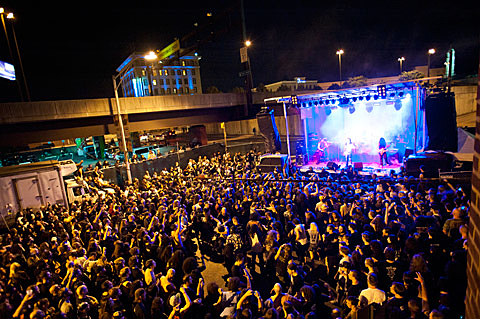 After all of the drama with Baltimore venue Sonar, looks as if Maryland Deathfest will return to the space after all... sort of. The scoop:

In a nutshell, we will be returning to the property formerly known as Sonar, and will be at least doubling the amount of outside space that we've been used to utilizing...The additional space outside will allow us to comfortably accommodate the crowd, and will allow more room for the MDF vendor village, food vendors/food trucks, places to sit, and other new additions like misting tents to escape the possibility of it being hotter than it should be that weekend. There will be two outside stages plus the stage inside. Due to the new configuration outside, the placement of the outside stages will likely be different.

As for the building itself, there are some renovations currently taking place, but the rooms will be used exactly how they have been in the past, and it will be air conditioned throughout.

We would also like to announce the addition of a second inside stage at Baltimore Soundstage, which is a 1/2 mile walk away from the former Sonar (at 124 Market Place), and will be used from Friday-Sunday. This will be a smaller show without a barricade that will feature mostly hardcore and punk bands, and it will be scheduled in a way that should not conflict with anything going on at the former Sonar compound.

Look for more band announcements to emerge in the coming weeks, including details on that hardcore/punk stage.