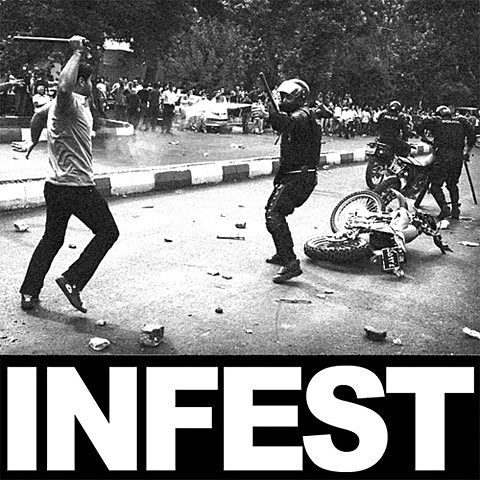 Not only has Maryland Deathfest (May 23-26, 2013) expanded with additions of Down (who recently played NYC), Melvins (them too), The Obsessed (!), Ufomammut, Deiphago (who is coming to NYC), Cobalt (as discussed), Evoken and more, they have also added a mostly-punk/grind/powerviolence stage too! The festival promises that set times will not overlap with the  Baltimore Soundstage, which will host an Infest reunion (!), along with appearances from Citizens Arrest, Converge (who is on tour this fall), Iron Lung, Full of Hell (who is on tour with Gaza), Sete Star Sept, Vitamin X, Magrudergrind, Kromosom, Ilsa, and many more. Updated MDF lineup, with the new punk/hardcore/metal stage, is below.

Infest split in 1996 after ten years of pioneering a style that would later be known as "powerviolence":

The band, while not coining the term powerviolence, were definitely pioneers of it. The Los Angeles quartet blended the ethos, speed and song structure of hardcore, along with the aggression and anger of bands like Negative Approach and Negative FX creating a style emulated by many and an energy captured by few. Joe Denunzio's vocals exhibited pure angst, with lyrical content about conformity, war, scene politics and socio-political issues, mostly delivered in an accusation assault. -[Last.FM]

Full lineup is below, along with vintage Infest clip and other MDF-related video.